Australian newspaper, The Herald Sun has been hugely criticized for publishing a racist cartoon which mocksSerena Williams after her loss to Naomi Osaka at Saturday’s U.S. Open final.

In the cartoon, the tennis legend is depicted as a baby angrily jumping on her smashed racket with a pacifier nearby. In the background, her opponent Osaka is depicted as white with straight, blonde hair facing towards umpire Carlos Ramos who pleads: “Can you just let her win?”

Mark Knight, the editorial cartoonist for the Herald Sun in Melbourne, proudly shared it on Twitter prompting an outrage online with many slamming the Australian Newspaper and accusing them of racism. 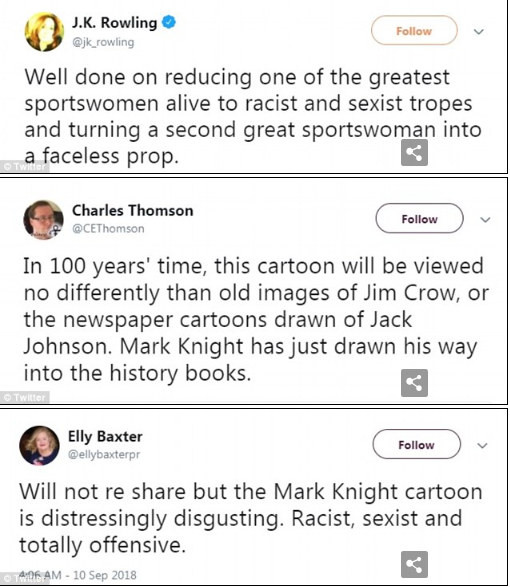 But Knight has since dismissed social media criticism of his drawing of Serena Williams that perpetuates the racist and sexist “angry black woman” trope.

He directed them to a cartoon he drew of tennis bad-boy Nick Kyrgios and wrote: ‘Here’s a cartoon I drew a few days before when Australian male tennis player Kyrgios at the US Open was behaving badly.

‘Don’t bring gender into it when it’s all about behaviour. I’ll accept your apology in writing.’ 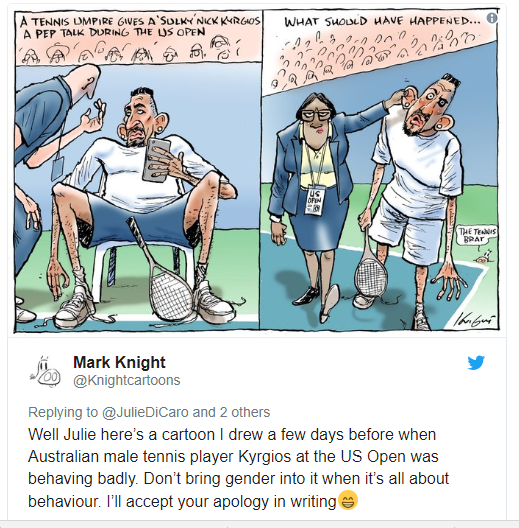