Parents, son and his girlfriend arrested for stealing in Lagos

A couple, their son, and his girlfriend have been arrested for stealing from a neighbour who went on a 3-month vacation, leaving her house vacant.

The house help noticed a lot of things – including the car –  were missing and immediately alerted the police who began investigations and soon caught the culprits.

“When Mrs Folashade Odunuga of No. 8 Ade Onitiri, Harmony Estate, Langbasa, Ajah, embarked on a 3-month vacation which  commenced on May 27, 2018, little did she know that her apartment  would be broken  into and her household  property including her car, stolen by eighteen-year-old Tega Teddy  aided by his parents Mr. Uroye Teddy, 45 years old and his mother Mrs. Margaret Teddy.

“Also fingered in the offence is Tega’s girlfriend, one Karima Edom, a close neighbour of the victim who allegedly passed information of the victim’s absence from home to her boyfriend. 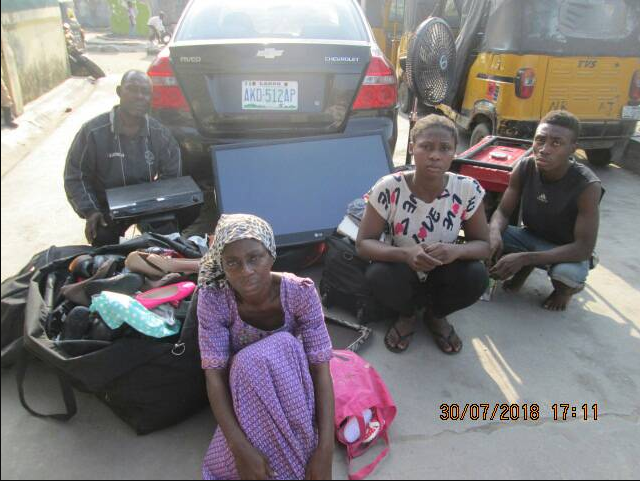 “The stealing had been going on for weeks until the victim’s househelp, one Eniola Abisola visited her mistress’ house and discovered that a lot of items were missing. She couldn’t understand  how the thieves entered the apartment as all doors to the house remained closed.

“She immediately alerted the Divisional Police Officer (DPO) in-charge of  Langbasa Division, SP. Adaobi Okafor who mobilised her detectives to check on all in the neighbourhood whose names are in the station’s watch list.

“When the detectives checked on Tega, they saw the stolen Chevrolet Aveo saloon car with registration number AKD 512 AP,  parked in the front his parents’ house at New Osho layout, Langbasa. He was promptly arrested.

“During interrogation, he revealed that he entered the victim’s house through the ceiling and gradually, he began to pack the household items to his father’s house. He narrated that his mother helped him to hide the stolen items in an uncompleted building while his girlfriend Karima, hid some in her house. The suspect, Tega, further revealed that his father went with him to the victim’s house to tow the aforementioned car. It was seen that Mrs Margaret Teddy had put the stolen properties for sale.

“The Commissioner of Police,  CP Imohimi Edgal, charges Lagosians to take their personal security seriously by ensuring that their houses are entrusted in the hands of trusted relations, friends or aides whenever they travel. He admonished that people should go back to our old way of visiting their neighbours to check on them. He added that if that was the case in this instance, Teddy and his girlfriend Karima wouldn’t have had the effrontery to cook, eat and wine in Folashade Odunuga’s house during her long absence from home.”